THE THERMAL WALL TECHNOLOGY - HOW IT WORKS

The Thermal Wall Technology is comprised of three components: 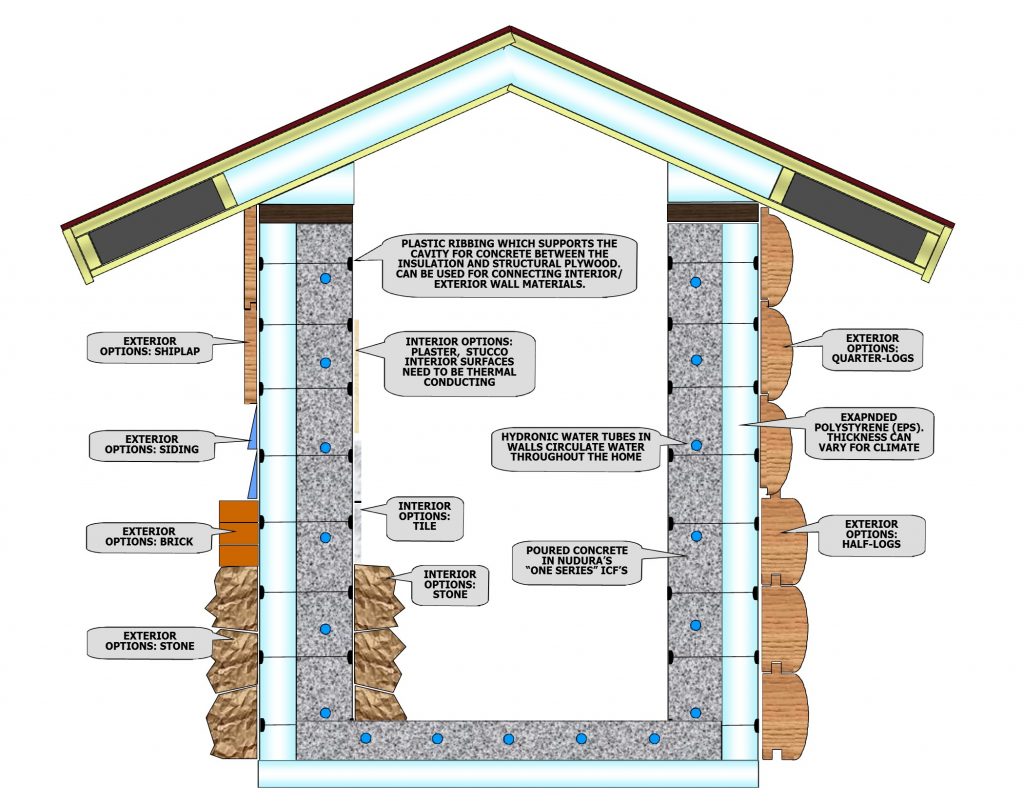 The shell of the structure is comprised of a single-sided insulated concrete form (SSICFs). On the exterior side of the SSICF is expanded polystyrene with a plastic webbing that connects to a removable/reusable structure plywood panel. 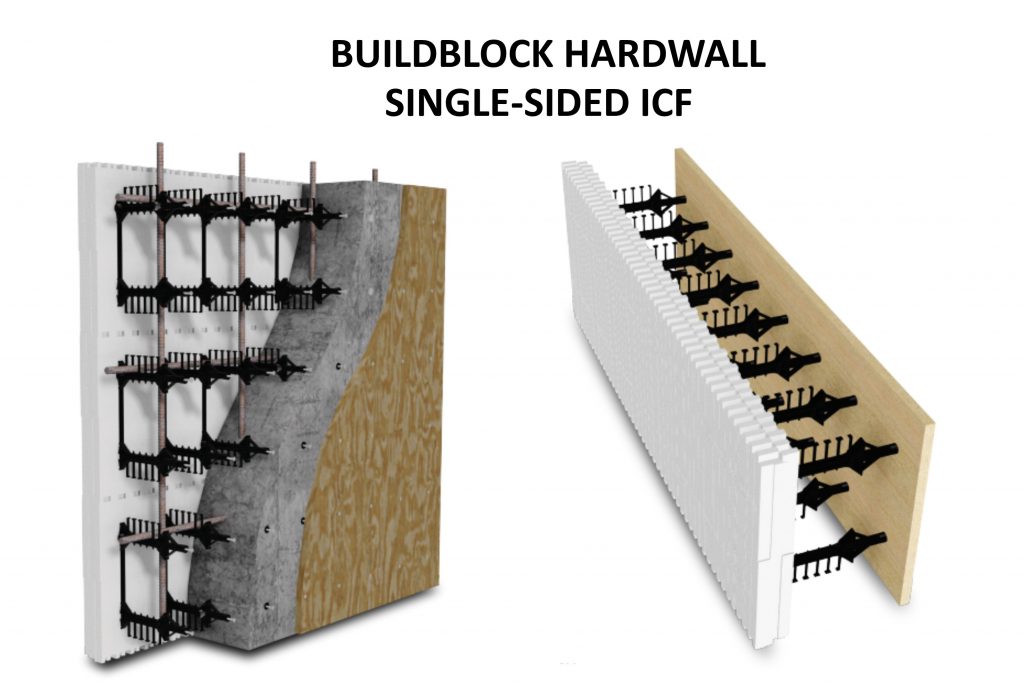 Research is also underway to determine the feasibility of TWT construction utilizing a concrete masonry unit (CMU) (concrete block) or Architectural CMUs. Initial indicators suggest CMUs could be utilized in many TWT applications.

The thermal mass of the concrete has the ability to store huge amounts of energy at a very low temperature. This low operating temperature is the driving force which enables the ultra-high heat pump efficiency and solar thermal hydronic (water) collector efficiency. The lower the operating temperature of the system the more efficient the heat pump and collectors become. As a result of the huge amount of thermal mass the temperature of the walls and floor can hold several days’ worth of heat at a temperature in the 65-75° Fahrenheit (F). The ample surface area of the walls and floors radiate heat at the optimum human temperature to the interior. 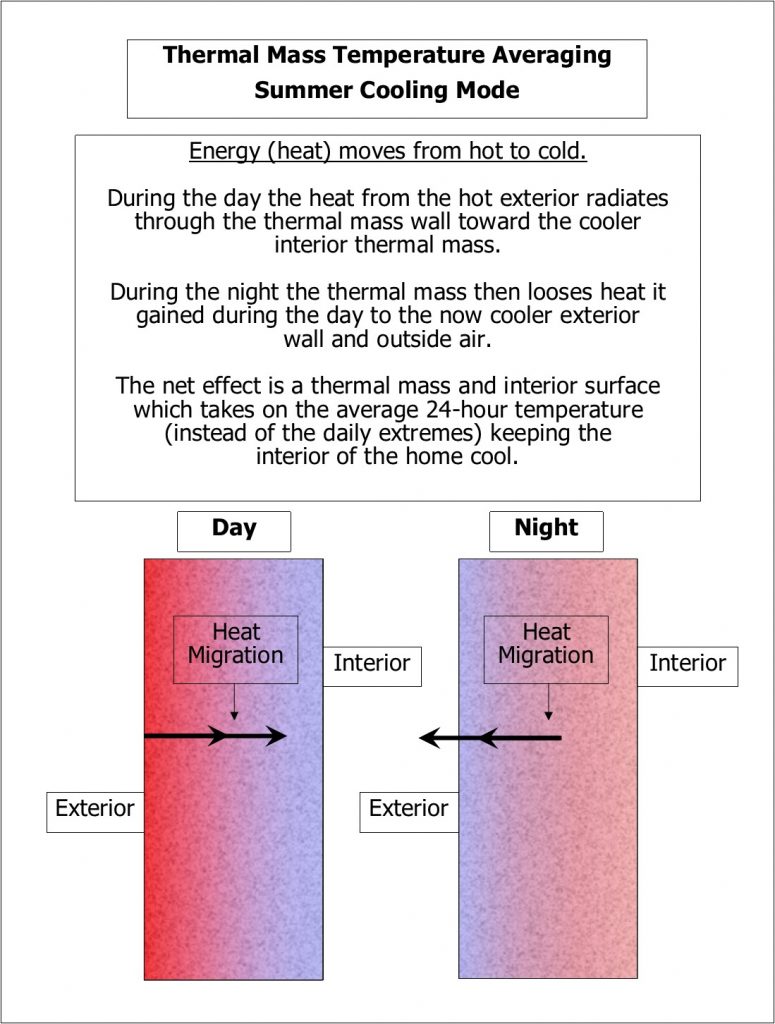 A second principle concept is thermal amelioration (thermal temperature averaging) of the thermal mass. As an example, Mammoth Cave maintains a temperature of 53-54°F year-round. As the winter and summer temperatures migrate (in all directions) through the soil and rock they ultimately take on an average temperature; the same principle is true for the TWT only an a lesser time scale. The TWT in the cooling months takes on the average daily temperature. As an example, if during the daytime the high temperature reached 92°F you would need to operate air conditioning , while a nighttime low temperature of 52°F may require heating; however, the average daily temperature would be 72°F. In the TWT due to the thermal mass amelioration, the interior of the home would be at or near the average 24-hour  temperature of 72°F. In the model, daily average temperatures were collected for Asheville NC and the TWT amelioration eliminated all but 10-days of cooling for the year 2010. 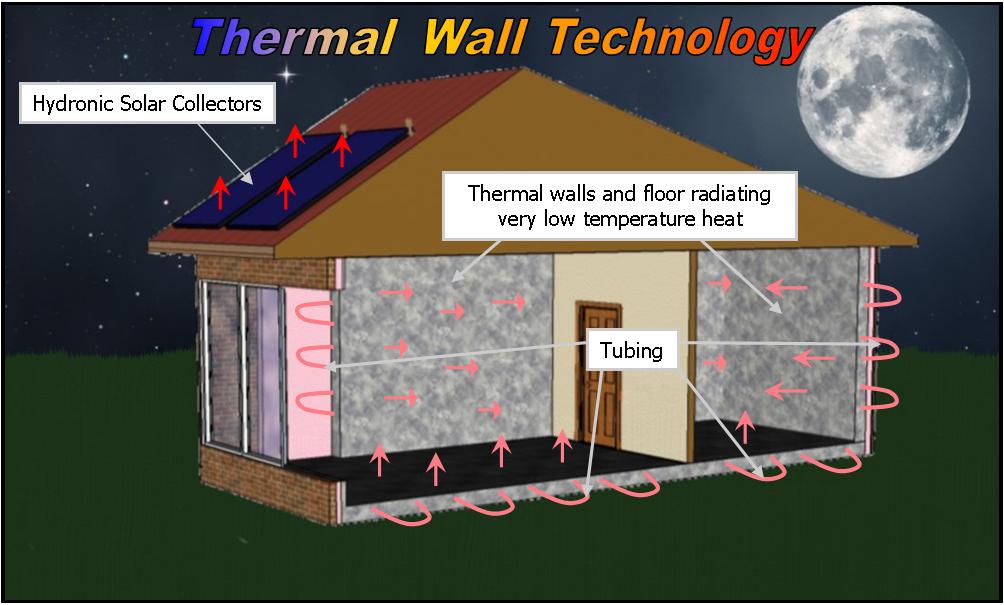 For the minimal cooling needed on extremely hot days a heat pump could deliver cool water to the thermal walls (at a 50-60% higher efficiency). If utilizing solar thermal hydronic collectors, the collector system could be run at night, discharging heat from the walls to the outside, thus cooling the interior.

A third principle concept is the type of heat delivered by the TWT; infrared radiation (IR). IR heat is energy that is directly radiated from a substance. Examples of IR heat would be a heat from an electric stove top, old fashion steam radiators or a campfire. In the case of the TWT structure IR radiates from the walls and floors. IR moves at the speed of light and heats the objects it strikes, not the air; therefore, you can receive the same level of comfort as forced air heat at 5-8°F lower temperatures, which equate to a 12-19% reduction in energy.